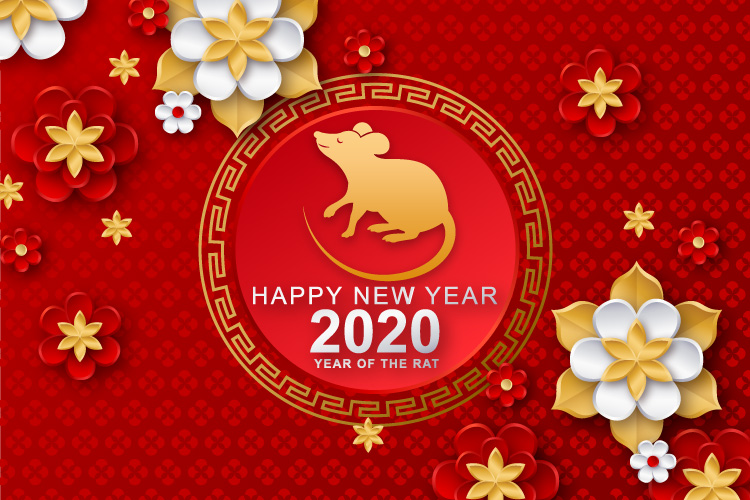 Chinese New Year 2020 –Welcome to The Year of The Rat.

Following recent political events in our region, we thought we would try to find a happier subject to discuss with our valued customers.

The Chinese Lunar Calendar has twelve characters that each represents one year in a twelve year cycle.

It is said that the order followed by the different characters was established when the Jade Emperor invited all of the zodiac animals to a party and the order in which they arrived would be the order that they followed in their associated years. The Rat tricked the Ox into carrying him to the party and jumped down just ahead of the Ox as they arrived, claiming first place.

The Chinese calendar is different to the western Gregorian calendar and the New Year begins with the Spring Festival commencing at the time of the year’s first new moon. The Chinese New Year celebrations last for fifteen days and end with a Lantern Festival to coincide with the full moon. Chinese New Year 2020 begins on 25th January 2020.

People born in The Year of The Rat are said to be optimists with an energetic demeanour and are well-liked by all due to sensitivity to the emotions of others. Lucky colours for ‘Rats’ include gold, green and blue.

Many traditions have developed over the centuries in relation to Chinese New Year, to the extent that there are certain things that should, or should not be done on each of the fifteen days of celebrations.

Spring Festival will see many Chinese people travelling home to be with family and friends in time for a traditional New Year’s Eve meal in honour of ancestors and family. Food served at this Reunion Dinner is often yellow or gold, colours associated with prosperity in Chinese culture.

Fireworks are a long standing tradition for use during the celebrations and are linked to an ancient myth of villagers setting off firecrackers to ward off a monster that was terrorising the population.

One of the quirkier traditions is to not demand repayment of a debt during the celebrations as this will supposedly bring bad luck to both parties.

Colours are of particular importance and the colour red is the most traditional for Lunar New Year with pink and orange also associated with health and good fortune.

Be very careful not to give the ‘wrong’ gift. Giving a clock as a gift is considered unwise as the term ‘gifting clocks’ sounds the same as ‘paying one’s last respects’ in Chinese.

We have the latest edition 2020 Lunar Year of The Rat gold bars from PAMP in 5g and 1oz sizes available to order now.

The Team at iGold would like to wish all of our customers a Happy New Year.